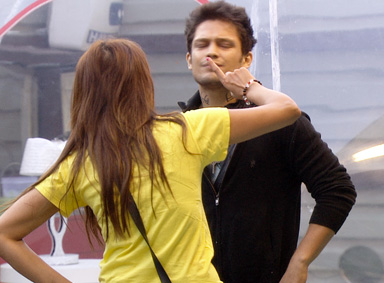 Day 24: The weekly task of making 500 candles by each team can be quite taxing in such a small period of time. The housemates were giving in their level best in order to complete this task successfully, in fact they were so engrossed in it that a few of the housemates ended up staying awake all night! The teams were determined to win the battle against time & enjoy the luxury budget this time around.
Siddharth & Lakshmi were working on the candles even early in the morning. After being exhausted from all the hard work, a tired Siddharth had walked up to Pooja Misrra who was snoozing in her room. A patient Sidharth tried waking Pooja Misrra up politely, but the stubborn model refused to cooperate. An agitated Siddharth storms out of the room after giving her a piece of her mind & starts discussing the problem with Mandeep. While Mandeep & Sidharth are in the middle of a conversation, a sleepy Pooja barges into Siddharth’s elbow & almost slips from the stairs. A furious Pooja starts abusing Siddharth accusing him of pushing her with his elbow intentionally! An innocent Siddharth loses his cool & starts abusing the living day lights out of Pooja. Mandeep who was neutral tried to intervene & explain to Pooja that it was a genuine accident & not an intentional move! A disgusted Pooja & Siddharth were still going at each other with much hate & anger. The fight goes on for a while until the two are forcefully kept away from each other.
An unaware Shraddha walks up to Siddharth to find out what was happening. Siddharth tells her that their team was falling quite short of resources as Pooja Misrra & Mandeep did not contribute to the task. The two get into a discussion in order to find a solution. After a while, an upset Pooja Misrra walks up to Amar to share her opinion on her fight with Siddharth. Amar listens to her side of the story & refuses to take any action against Siddharth as he feels it is unfair for him to comment since he was absent at the time of the incident. On hearing this, Pooja Misrra loses her temper completely & starts accusing Amar of being an unfair, self centered & a heartless guy!
Amar Upadhyay was very patient until Pooja made such harsh comments on him. Boiling with anger Amar starts to fight back with Pooja Misrra & starts calling her all sorts of things. He tells her that she acts mentally instable & that she really needs some medical help! A furious Amar accuses Pooja for being extremely unreasonable & irrational. The two again are put to safe distance from each other in order to curb the fight. While one would think some peace is restored, Pooja Bedi & Shraddha are the next culprits for causing yet another fight! Pooja Bedi & Mahek were sitting in the verandah and chatting up about the amount of bitchiness spreading in the house.
Shraddha enters the verandah & interrupts the conversation. She lashes out at Pooja Bedi & starts insulting her with rather demeaning words. She accuses Pooja Bedi of being a “tuchhi” in the industry & tells her that even her children would be ashamed of their 45 year old mother trying to look & act like a young gun. An agitated Pooja Bedi is extremely furious at Shraddha & asks her to keep her mouth shut & mind her own business. She tells her very sternly to stop doubting & commenting on her character.
To calm things down after such a brutal day, Bigg Boss announces & requests the housemates to maintain some peace at least during the lovely festival of lights & try & live with each other in some harmony. Bigg Boss wishes all a very Happy Diwali & tells the housemates that they are in for a pleasant surprise very soon!
To be a part of the action, don’t miss Vodafone presents Bigg Boss 5 at 10.30pm, only on COLORS
Posted by Films & TV World at 11:52 PM