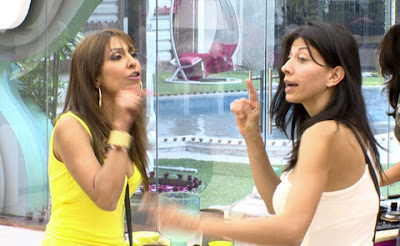 Day 26: The day starts with yet another fight as Pooja Misra & Vida get into an argument over a kamarband which is supposedly Vida’s. Vida claims that it had fallen down a couple of days back which Pooja Misra had picked up conveniently and kept it with her. This really upsets Vida and she goes and talks to Mahek about it.
After a while Lakshmi, Amar & Siddharth are talking about Pooja Misra and her psychotic behavior in the house over the past few days. They feel that fighting with people is like an addiction for her, and that she literally cannot survive without arguing or fighting with someone or the other. They come to an agreement that something needs to be done with her as she is just crossing all limits & being a burden instead of a buddy to everyone.
In a bit, Pooja Misra joins the party on the dining table and taunts Amar for a statement he had made. Amar doesn’t hold back from taunting her back. After a while, Lakshmi intervenes in their conversation and lightens up the atmosphere by cracking a few jokes on Pooja Misra. Shraddha aned Siddharth were washing the dishes as Sky walks in and offers t help. Shradhha obliges him by giving him her job and she walks away coolly. Later Sky realizes that what he thought was a two minute job is actually a major job. Siddharth & Sky are found laughing thinking as to how foolish the idea of offering help was.
After sometime, Bigg Boss calls all the housemates to the living room to make an announcement. Once all are present in the living room, Bigg Boss punishes Pooja Misra, Pooja Bedi & Vida for talking in English despite several warnings. The punishment was that all three shall be tied with handcuffs until the next announcement, also at any point of time only one of the three can be seated and the rest would need to stand.  Pooja Misra & Pooja Bedi start blaming Vida for the punishment as they claimed that she is the sole reason why people feel the need to talk in English.
Pooja Bedi & Pooja Misra sang a Bhajan in front of the camera to Bigg Boss in order to apologize. Then, the boys of the house have a little gossip session of their own as they discuss who will be evicted in the upcoming Aapka Farmaan.  They come to a conclusion of their own and feel that Pooja Bedi has the highest chances of getting evicted. On the other end Shraddha & Amar talk about the coming weeks’ nominations & plan as to between whom they can create a fight for their personal benefit.
An emotional Pooja Bedi starts crying to Bigg Boss and expresses that she is being used, abused and insulted time & time again throughout the show. After a while, just before the lights go off Bigg Boss relieves the punished from the handcuffs and all are tired and go to sleep.
To be a part of the action, don’t miss Vodafone presents Bigg Boss 5 at 10.30pm, only on COLORS
Posted by Films & TV World at 1:22 AM