Neither twins, nor triplets! It’s Quintuplets on Oprah Winfrey Show 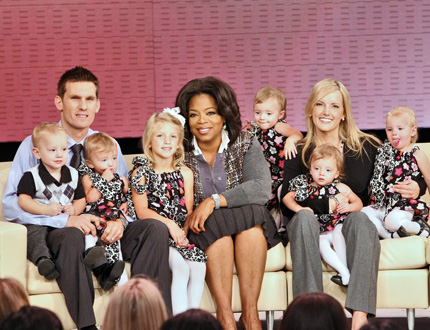 On BIG CBS Love this Thursday, meet Ethan and Casey whose life was as perfect as it can be. These High school sweethearts had a picture-perfect life: They married right after college, built their dream home and had a beautiful daughter named Eliot.
Then, they decided to have one more child using the same fertility treatment they used to conceive Eliot. But, the second time around, the results were a little different. Instead of one baby, they conceived five: Brooklyn, Ryan, Jack, Britton and Lila. Now, the quintuplets are almost 2 years old.
Casey tells Oprah she never imagined how much her life would change when her family of three grew to a family of eight. "Our life is just so crazy busy from the minute I open my eyes in the morning till the time I go to bed at night," she says. "It's unbelievable."
They're also coming to terms with the fact that raising six children isn't cheap. "We're like a balloon that's blown up, and you can see the side walls of the balloon just stretching and stretching, and you know at any moment it's just going to pop," Ethan says.
After the Jones quints were born, it wasn't long before a TV production company came calling. The Joneses met with the producers, hit it off, and reality series Quints by Surprise was born.
Ethan says the family enjoys having the camera crew in the house. "It's been great fun from the beginning," he says. "We always felt like the worst thing that could happen is we have great home videos for the first years."
When the quints were first born, 75 volunteers helped the Joneses 24 hours a day, seven days a week.
Curious to know about the Joneses future plans, Oprah asked if they were planning to have more children. "Jack's lonely," Ethan says with a smile. "He needs a brother. Jack and I need all the help we can get!"  Casey, on the other hand, thinks their unique family is complete. "All done!" she says.
Watch more about this unique family as Oprah chats with them on Thursday, October 20 at 8 pm, exclusively on BIG CBS LOVE
Posted by Films & TV World at 3:39 PM