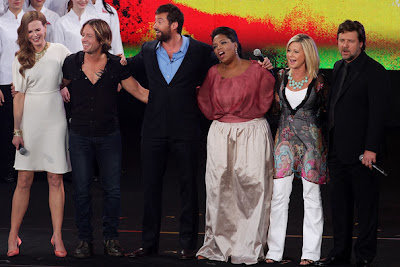 This Sunday, watch Nicole Kidman and Keith Urban join Oprah on stage for their very first interview together, right in their home country only on Big CBS. Oprah Winfrey gave the couple a warm welcome with a rousing round of applause from the thousands of fans present. Urban was looking sleek in all black, while Kidman looked graceful and elegant in a flowing white dress.
It was in plain view how obviously in love the couple is, with Urban keeping his arm around Kidman the entire time. The happy couple had both appeared on ‘Oprah’ not too long ago, but they were interviewed separately. As they sat down together for their first joint interview, Kidman said, “We saved it for Australia.”
As Oprah got the interview underway, it was clear that the country singer has quite a sense of humor. When Oprah asked what the biggest difference was that they saw between Aussies and Americans. Kidman went on to elaborate while Urban jokingly replied, “The accent.” Urban continued to joke as Oprah asked what they liked to do when they visited their homeland. Kidman answered, “We swim in the ocean,” while Urban said, “Chat with you.”
The show came to an end with a stellar performance of Peter Allen’s ‘I Still Call Australia My Home’ by the Australian Children’s Choir. Urban crooned a few lines as well, followed by Kidman. Nicole Kidman who seemed a bit shy about singing in front of such a large crowd was egged on by Keith Urban by saying, “Take it away girl!”
Urban and Kidman recently added a new bundle of joy to their family, baby girl Faith Margaret, who was born via surrogate. The couple also has a 2-year-old daughter, Sunday Rose.
Don’t forget to tune into BIG CBS to catch the Grand Finale of Oprah’s Ultimate Australian Adventure, on 30 October, 2011 at 8: 00 PM.
Posted by Films & TV World at 4:05 PM