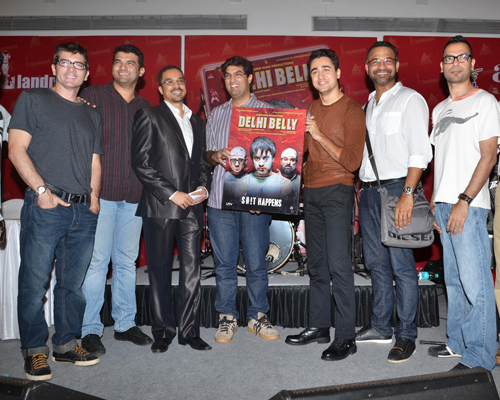 Imran Khan released the much-awaited DVD of the biggest cult hit of the year, Delhi Belly, on DVDat a live concert by Ram Sampath (Music Director) in a Mall in Mumbai. The DVD released by Excel Home Entertainment is the uncut version of the movie (as seen in theatres), and features all the music videos of the chartbusting album including the recently released “Bedardi Raja”.  The launch was attended by Imran Khan, Kunal Roy Kapoor with Ram Sampath, Akshat Verma, Abhinay Deo and singers Sona Mohapatra, Chetan Shashital and Keerthi Sagathia. Imran Khan also autographed DVD’s for the fans.
Says Imran Khan, “It was great connecting with the audience and the fans of the film. The huge fan base of the film will appreciate the DVD. We are amazed and humbled by the fan communities and the wide cult following of the film in different social networking sites”
With the success of Delhi Belly, Aamir Khan Productions has maintained a 100% success rate at the box office, and have successfully managed to straddle box office success with challenging and path breaking films, constantly pushing the envelope. This is their 6th film in 10 years. Says Aamir Khan,“The DVD of the path breaking film is an excellent opportunity for us to thank our audiences for the support and maturity shown in making this film successful. We are working on the special edition DVD and Blu–ray which will be released later this year.”
Says M.N Kapasi, MD, Excel Home Entertainment, “This is probably the first of its kind Indian film DVD to include both English and Hindi in 5.1 language track options simultaneously. The Pre -order of the DVD has been Phenomenal across the Country and we hope to see the sales continue to scale up through the festivities the coming week.”
A division of Excel Productions Audiovisuals Pvt. Ltd. (aka Excel Group), Excel Home Entertainment is the exclusive Home Entertainment licensee that handles nationwide marketing, sales and distribution for all Twentieth Century Fox, MGM, HIT Entertainment, Animal Planet, Chorion, Nickelodeon and other Independently acquired titles on Blu-rays and DVDs. It also is a distributor for the interactive games through Excel Interactive and Toys through My Baby Excels for several reputed international and local brands across a wide range of stores throughout India.
Posted by Films & TV World at 1:15 AM