Mumbai Film Festival gets bigger, better with an impressive lineup 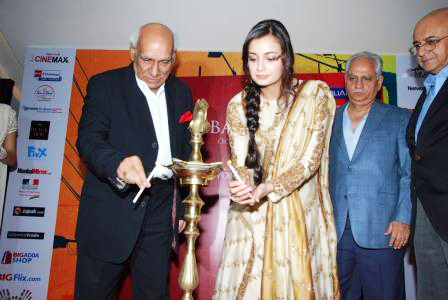 
After the traditional lighting the lamp ceremony, the festival was kicked open with  started with the much anticipated Bennett Miller’s film Moneyball starring Brad Pitt, Jonah Hill , Seymour Hoffman among others which was screened on all the screens. "Brad Pitt's spectacular performance till date, he just shows us how good he is" quoted Bishal Parui, a delegate who had come to the festival. "A delightful film, Jonah Hill is a revelation. The dialogues are so straight and simple, it cuts the air. Fabulous start to a fantastic festival," chirped another delegate.
The 13th edition of MAMI this year has an impressive line-up of over 200 films from 60 countries. Almost half the films in the competition section are by women directors. During the seven-day-long film festival, movie buffs will enjoy visual delights from the masters of the art like renowned international directors Lars Von Trier, Wim Wenders, Gus Van Sant and Bela Tarr. Apart from this, the winners from the world`s best film festivals, including Cannes, Berlin and Venice, are also lined up to be showcased during the festival.
Commenting on this occasion, S Narayanan, Festival Director MAMI said, “The 13th Mumbai Film Festival has certainly begun with a tremendous turnout. We sincerely hope that all those attending will see the effort put behind organizing this popular festival and hope that this year’s selection of films satisfies their appetite of quality cinema.”
When asked how it feels to see so many women filmmakers in this competition, S Narayanan adds: "Last year we had an all women`s jury and this year we have women dominating the competition section. What more could we ask for?"
"This is by far the best festival we have had under MAMI so far and the best in the country," MAMI chairman Shyam Benegal told media persons. "The quality of any film festival should be judged by its films. This year we have an enviable line up of not only the best films made in the world last year, but also the best from the Cannes Critics Week, first films of Indian filmmakers, great first film in competition etc. There`s something in the festival for everyone - the film professionals, cinema lovers and especially the youth hungry for good cinema," he added.

The red carpet saw various celebrities, cinephiles, delegates and media arrive for the ‘Moneyball’ screeningwith great enthusiasm. The screening of the movie was then followed by a red carpet at Sun N Sand for the opening ceremony and dinner function that saw in attendance various B-town celebrities such as Abhinay Deo, Ranvir Sheorey, Kiran Juneja, Vikramaditya Motwane, Rohan Sippy, yesteryear actress Jayshree T and Golide Behl amongst many others.
The second day of the festival, 14th October, will see close to 50 movies being screening at Cinemax Versova, Cinemax Sion and Metro Big Cinemas in Mumbai. The films include Julia Leigh`s Sleeping Beauty from Australia, History Only Exists When Remembered by Julia Murat from Brazil/Argentina, My Little Princess by Eva Ionesco from France, The Dead Sea by Leena Manimekalai from India, The Mirror Never Lies by Kamila Andini from Indonesia, Delhi in a Day by Prashant Nair and She Monkeys by Lisa Aschan from Sweden.
The festival is a Reliance Entertainment initiative, organized by Mumbai Academy of Moving Image (MAMI).

Ravikant Singh
Posted by Films & TV World at 9:54 AM