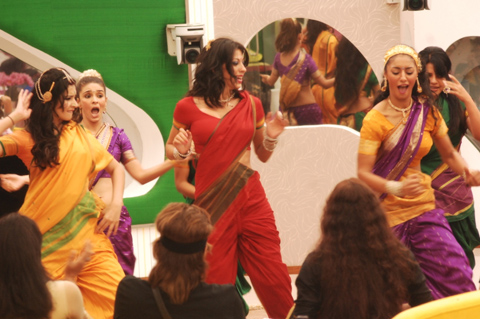 Day 5: While all the housemates have been cycling over the night, Pooja Misra who has also contributed to the task is asked by the captain to join in again when she is resting in the morning. Pooja claims that she is unwell & snaps at the captain. This in turn gets all the housemates furious and is upset with Pooja Misra’s behaviour.
After continuously cycling day and night for the weekly task, the housemates reach their final destination – Chennai. Here the contestants are told to appoint one contestant as the choreographer. The choreographer has to pick 6 dancers who will dance to a Tamil song. Lakshmi is chosen as the choreographer by the housemates. The other contestants, however, cannot go scot-free. They were required to memorize and sing the Tamil song while the dancers performed to it. 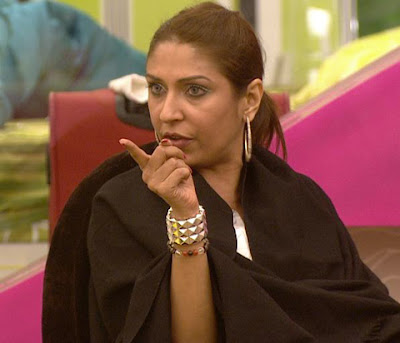 Bigg Boss calls Shonali into the confession room & offers some sweet treats in order to celebrate Dusshera. Along with the sweets, BB hands over a letter for the housemates. In which he mentions that a board has been provided for the housemates to prepare a budget for the coming week. Since the housemates completed the task successfully, BB awards them 3000 points for their luxury budget. While the housemates are deciding what all they want from their allotted budget, the screen suddenly flashes the option for Pooja Misra’s luggage which is worth 3000 points.
While Laxmi feels that Pooja Misra’s bag needs to be given to her, Pooja Bedi tells everyone that Pooja Misra has not been fulfilling her commitment towards the task or responsibilities in the house. Pooja Misra retaliates and lashes out at Pooja Bedi for being insensitive towards her. She yells at Lakshmi too and stomps out of the living room. Shraddha Sharma later approaches Pooja Misra, who adds that she does not wish to talk to ‘the thing’ referring to Lakshmi Tripathi. A considerate Sonika feels bad for Pooja and tries to console her. Mandeep offers food for Pooja in order to make her feel better. Post which Pooja realizes her mistake & tries to portray a genuine confession.
To be a part of the action, don’t miss Vodafone presents Bigg Boss 5
Posted by Films & TV World at 11:31 AM