Oprah Winfrey meets Terri Irwin, wife of Steve and his children on her Ultimate Australian Adventure 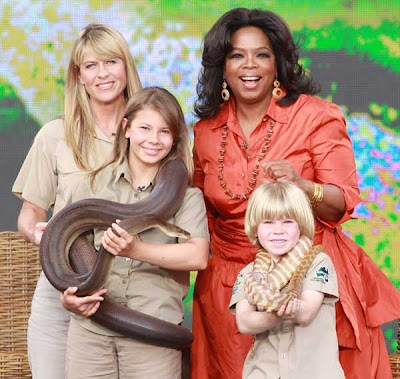 When you lose the one you love the most, life becomes difficult. And that’s how life became for Terri Irwin too. Terri, wife of Australian Crocodile hunter, Steve Irwin, talks to Oprah about how she coped up with life after Steve’s death. Oprah’s Ultimate Adventure would have been incomplete without meeting Steve Irwin’s family.
The Australian television star who was known as the "Crocodile Hunter," tangled with snakes, swam with the sharks and wrestled with crocs. The Aussie's wild adventures and his catchphrase "Crikey!" was loved by 500 million viewers in more than 100 countries.
Then, in 2006, tragedy struck the wildlife warrior. While filming a documentary on the Great Barrier Reef, Steve was struck and killed by a stingray. This 44-year-old conservationist left behind his wife, Terri, two young children, Bindi and Robert, and a lasting legacy at the Australia Zoo.
At his memorial, Steve's daughter Bindi made a promise. "I had the best daddy in the whole world, and I will miss him every day," she said. "When I see a crocodile, I will always think of him and I know that daddy made this zoo so everyone could come and learn to love all the animals. Daddy made this place his whole life. Now it's our turn to help daddy."
Bindi is now 12 years old and joins her younger brother, Robert, and mother, Terri, on stage with Oprah—along with a few friends, of course! "This is a little olive python," Bindi says. "The olive python is the second largest snake in Australia. She's just gorgeous."
The Irwin family still runs the Australia Zoo, which spans 1,500 acres. Bindi tells Oprah, "We literally live in the middle of the zoo. It's fantastic. Every day's a new adventure."
Seven-year-old Robert has brought a friend from home. His friend was a beautiful snake. "He's called a Woma," Robert says. "Their Latin name is Aspidites Ramsayi."
To keep the memory of his father alive, Robert says he watches tapes of The Crocodile Hunter every day. "It's so good because it's like he's actually there, and he was the best dad ever," Robert says.
Terri says their loss is still hard. "I think living with Steve was like standing in a cyclone," she says. "It was 'Cyclone Steve' with that passion and enthusiasm, and [we were] just trying to keep up every day. Then when we lost him, it was just like the wind stopped."
Instead of shutting down after Steve's death, Terri says the family has kept his conservation efforts alive with The Steve Irwin Wildlife Reserve in Queensland's Cape York Peninsula. "Not only have we continued, we've just gotten bigger and better," she says.
Watch Terri Irwin and her children talk to Oprah about Steve and introduce their beautiful friends (snakes) to Oprah on her Ultimate Australian Adventure on BIG CBS LOVE, tomorrow, Sunday October 23, at 8 pm.
Posted by Films & TV World at 9:16 PM