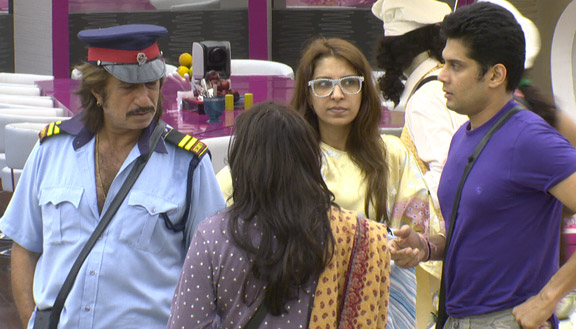 Day 11: The day starts with Shakti complaining to Vida about Amar not being up in the morning to successfully assist with the weekly task. They continue on to talk about other happenings inside the Bigg Boss House including the impending captain elections. Once the rest of the housemates are awake, Shakti lashes out about Amar to Juhi and asks her to have a word with him about not completing his responsibilities.
After a tiresome argument about dishwashing responsibilities the previous night, Pooja Bedi takes her role seriously. But, when she asks Pooja Misrra to join her for washing the dishes in the morning, Pooja Misrra proceeds to the bedroom to apply makeup. This pisses Pooja Bedi off and she washes the dishes by herself.
Amar and Mandeep decide to lobby for votes to be nominated as the captain for the coming week. While pointing out why he is the better option, Amar makes an unsavory comment that does not sit well with Juhi. A big fight ensues which results in a yelling match between Juhi and Amar. The other contestants intervene and push the duo in two separate directions. After a lot of justification and name-calling, a frazzled Juhi breaks down and refuses to eat. Seeing this, Amar apologizes to Juhi which she reluctantly accepts.
Directions for next week’s captain nominations are given. After the elections are completed and a new captain is elected, ex-captain Shakti Kapoor is asked to move out of the Head of House Room. Mandeep makes the plea for a reluctant Shakti so that he might be allowed to continue to stay in the captain’s room. But Amar and Lakshmi intervene and ask him to move out of the room as per the house rules and move to the spot that will be vacated by the new captain.
Minutes before dinner, Mahek heads to the garden area where she confronts Juhi about avoiding her after the fight with Amar. She conveys to Juhi that regardless of situations that may arise in the house, she will always remain Juhi’s friend and doesn’t see the need to prove it. Juhi lashes back saying that Mahek was not around when she needed a friend during her breakdown, due to which she was mad at her. Juhi then heads to the bathroom where she discusses this confrontation with the other housemates present there. Lakshmi tries to stand up for Mahek when she hears the conversation. Mahek soon joins the group in the bathroom. An arguments ensues between Mahek, Juhi and Shonali in the garden area which is moderated by Pooja Bedi. Pooja tries to create peace between the trio and eventually the three hug and make-up.
After the argument, Juhi, Shonali and Vida are sitting in the garden area and talking about issues prevalent in the house, when Amar joins them. Amar and Vida take on their daily dose of unwinding by flirting with each other, after which Amar heads to bed.
To be a part of the action, don’t miss Vodafone presents Bigg Boss 5 at 10.30pm only on COLORS.
Posted by Films & TV World at 9:39 AM