Trying to perform a stunt, Hugh Jackman ends up hurting himself on Oprah’s finale 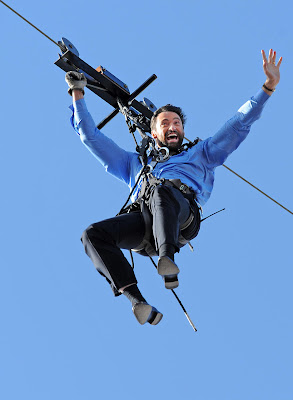 The Oprah Winfrey Show on BIG CBS LOVE recently showcased the ltimate Australian Adventure and celebrated it with great pomp and show. But the journey has come to an end now and the finale won’t be any less then the colorful journey. The guest list of the special finale includes Australian superstars Nicole Kidman, Keith Urban, U2’s Bono, Hugh Jackman and Olivia Newton-John. But the star-studded evening had a little mishap too.
On the eve of Oprah Ultimate Australian Adventure finale, the Real Steel actor, Hugh Jackman takes everyone by surprise and makes a dramatic entrance. But the entrance takes an ugly turn when Hugh who was attempting to enter the stage by riding on the flying fox slams into the rigging. The actors timing of hitting the brakes wasn’t quite right and Wolverine ends up injuring his eyes and bleeding profusely.
The team reacted faster than expected and immediately took the actor away from the set. This unfortunate event resulted in suspension of the show. The actor was soon after giving right medication.
Even as the shoot took an ugly turn, there was no stopping for the Australian dare devil. Hugh Jackman returns on the sets with a bang and carries on with his scheduled interview segment, sporting an adhesive bandage over the wound and a black eye.
Watch the stunning actor Hugh Jackman and other Australians celebrities on the Grand Finale of Oprah’s Ultimate Australian Adventure only on BIG CBS LOVE, on 30 October, 2011 at 8: 00 PM.
Posted by Films & TV World at 9:17 PM