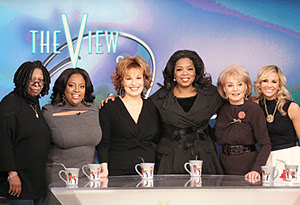 For the first time ever, this Wednesday on Big CBS Love, the hosts of the renowned American talk show, ‘The View’, Barbara Walters, Whoopi Goldberg, Joy Behar, Sherri Shepherd and Elisabeth Hasselbeck appear on The Oprah Winfrey Show. Since its debut, The View has become a pop culture phenomenon. The women have made this show news worthy by taking on interesting and engaging topics, pushing the buttons on politicians and having some very heated discussions.
This is the co-producer Barbara Walters’s fourth appearance on The Oprah Show. At her first appearance, Oprah told her audience, "Here I am today, I think, because I pretended to be Barbara Walters for the first year of my broadcasting career in television and look where it got me." Barbara jokingly reminds Oprah of this and assets that she is responsible for the latter’s career.
Actress, singer and comedian Whoopi Goldberg plays the moderator on the show. She says ‘The View’ is the first steady, every day job she's had and that it's a constant struggle remembering not to get in trouble. She says, “We can have a spirited discussion about abortion and then talk about French ticklers.” Whoopi recently spoke of her struggle with drug addiction on the show, calling herself a "functioning drug addict" at one point. She declares she doesn't regret making that statement.
Comedian Joy Behar is the only original member of ‘The View’ other than Barbara. For the last 28 years, Joy has been in a relationship with who she calls her "spousal equivalent." A few years ago, they got engaged but Joy eventually called it off. "I get scared by marriage," she says. "I've decided I'll marry him on my death bed because then when they say ‘'Till death do you part,' it will only be five more minutes."
Along with her job co-hosting ‘The View’, Sherri Shepherd has been busy planning her upcoming Chicago wedding to her fiancé, Lamar Sally. Sherri's even including her friends from ‘The View’ in her nuptials—Barbara is throwing her shower, and Elisabeth is one of her eight bridesmaids.
When discussions on The View turn to politics, Elisabeth Hasselbeck sometimes finds herself all alone as she typically represents the Conservative position, but she says she never feels picked on. She describes their conversations as fun and challenging.
Talking about their second jobs, Barbara says she heads over to ABC News where she prepares for interviews and specials. Joy's day continues with her nightly interview show. Sherri hosts The Newlywed Game. Whoopi goes to work producing a Broadway musical based on her movie Sister Act.
Watch these remarkable ladies on Oprah Winfrey show on Wednesday, October 26 at 8pm, exclusively on BIG CBS LOVE.
Posted by Films & TV World at 11:59 PM