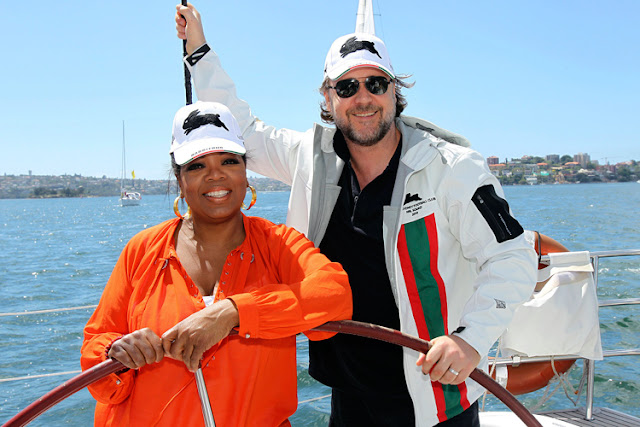 On another sunny day in Sydney, Oprah sets sail on the harbor with our Ultimate Viewers. During the first Oprah Show regatta, Oprah's first mate is none other than Oscar winning actor Russell Crowe accompanied by his beautiful wife, Danielle.

On Oprah Winfrey’s Ultimate Australian Adventure on BIG CBS LOVE, the team sets sail in the tranquil Australian waters as the sun shining bright. On their way to the Eagle Rock, Oprah couldn’t help but ask the Gladiator actor about how he met Danielle. “We met in a café in Paddington in 1989 and got married in 2003.”
Receiving an Oscar can be life changing. After winning the Oscar, life of Russell too changed, for a while, he said.
While aboard, Russell recounts the advice Oprah gave him more than 10 years ago and how it has had an impact on him. At first, Oprah refused to believe that her words could inspire a superstar like Russell Crowe. Russell said, “Couple of years ago you said about using your intuition, for understanding people you deal with. Understanding whether they are the right people or not… ”
The Gladiator actor mans the boat while chatting with Oprah about his family. Today, they have two sons, Charles and Tennyson.
Co-captains Russell and Oprah waved to Ultimate Viewers in nearby boats. Oprah Winfrey, a sailing fan, says she had the ‘time of her life’ cruising Sydney Harbour with actor Russell Crowe.
Watch Oprah Winfrey sail away to the Eagle Rock with Russell Crowe, on October 16 at 8 pm, Exclusively on BIG CBS LOVE

Ravikant Singh
Posted by Films & TV World at 1:26 AM