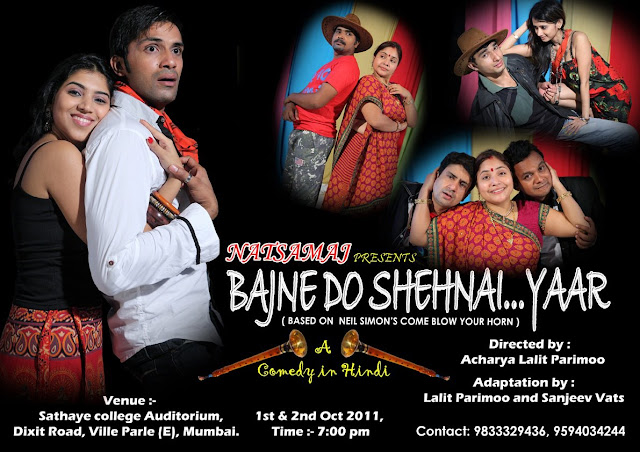 In this age of rom-coms and sitcoms dominating the telly and film scene, can theatre be left far behind? Obviously not, as comedy plays have been the life line of theatrewallahs. "BAJNE DO SHEHNAI... YAAR" is one such comedy play which revolves around the lifestyle of playboy Mayank and his ultimate realization, that for true and long-lasting love, marriage is of utmost importance.
The story takes off with Hansal, who leaves his parents house to live with elder brother Mayank. Mayank in his true flamboyant lifestyle encourages his younger brother to shed his virginity and enjoy life as an epicurean with food, girls, night life and no responsibilities.
Their parents who are traditional and orthodox section are unable to cope with the new change. This creates funny situations and children and parents remain alien to each other. Mayank, who is a ladies' man, after a near break-up with one of his girls, develops deeper emotions and feelings for her. Hence, he decides to marry her and becomes more responsible as a professional also. Meanwhile the younger one blossoms into a playboy, imitating the elder one. He has learnt dating, dancing, drinking and becomes completely irresponsible. This creates a new, interesting and humorous clash between the brothers as both have interchanged their roles and are about to lead new lives.
Written and directed by Lalit Parimoo, "BAJNE DO SHEHNAI... YAAR" is making its debut today at Sathaye Auditorium, Mumbai sends across a social message that one may live a reckless life for some time, but sooner or later the spiritual values and sense of responsibility should be the guiding force. The cast includes Devendra Mishra, Amit Shrivastava, Bijendra Singh,Aneesh Kumar, Rajashree Mishra & others.
Posted by Films & TV World at 11:54 AM