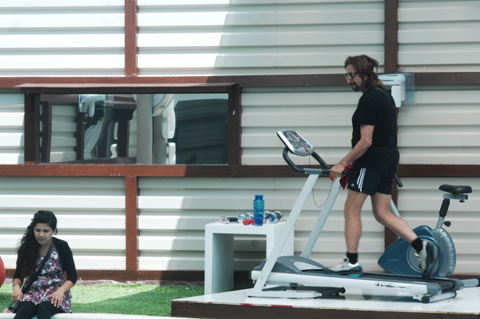 Day 2: The contestants are up in the morning & the women in the house are surprised to see Shakti dressed in a flowing gown like night suit. They pull his leg over the outfit and Shakti being a sport joins them in the fun conversation.
Nihita who is trying to gel with the contestants tries to strike a conversation with Shakti. While Shakti is on the treadmill Nihita keeps blabbering to him on illogical topics. Shakti keeps his calm and listens to her but finally when Nihita goes back in the house, he is relieved at the sight. The real  reason behind his sigh of relief though was the ear plugs he was using at the time of his conversation with Nihita! 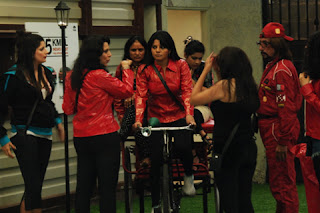 Shatki who has decided to give up alcohol while in the Bigg Boss house, speaks about how his alcohol addiction has impacted him and his family over the past 37 years! He expresses that this was the perfect platform for him to some justice to his family. After that he reveals that he had also screwed up his relationship with a lot of people in the industry, especially about losing his friendship with the current biggest superstar of Bollywood nine years ago.
The weekly task was also revealed today. Titled ‘Pahiya Ghumao, Kismat Chamkao’, this task will see the contestants teaming up for the rest of the week to fulfill the objective and earn points that will help determine their budgeting and rationing for the coming week. The task involves them riding a rickshaw and taking it to different cities that are marked on a map that is provided to the contestants. They will then perform an act based on the peculiarities of the city that they have reached. In between the performances, at all times i.e. 24x7, someone will have to lead the rickshaw and keep pedaling so that the street lamp placed beside the cycle rickshaw remains lit. 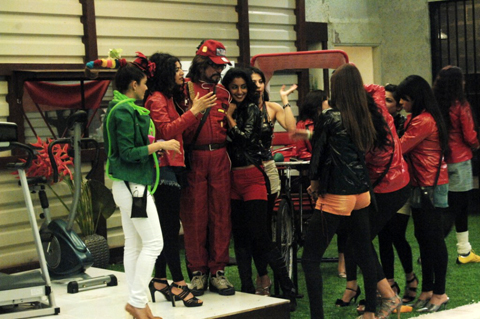 The first stop was Delhi where it was themed around Formula One. Captain Shakti Kapoor was dressed as Formula One driver and the female contestants were dressed in special pit girl costumes. The female contestants were made to clean the rickshaw and then pose with it while the other contestants took pictures. Then came the performer of the day, Miss lady Raga the official singer for the opening of the Indian F1 race. Rageshwari was dressed in weird attire just like lady Gaga and performed and entertained the housemates, which was much appreciated by all.
After all the entertainment, a cat fight erupted between Nihita & Shradha. Will this turn out into a huge brawl or will they patch up? Keep watching BIG BOSS for all the entertainment and more..
Posted by Films & TV World at 6:19 PM