From Living In The Material World to Nobel Chor, the palette was pretty interesting.. 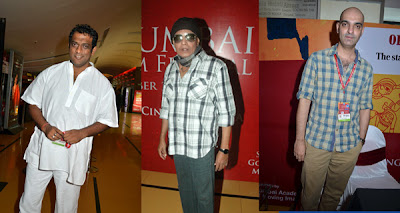 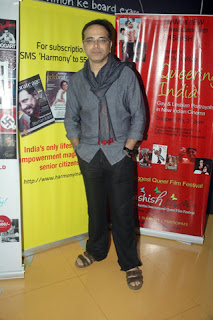 The Open Forum discussion for the day was on ‘The state of screen writing today…’ and the panel of guests included Vinay Shukla, Saurabh Shukla, Abbas Tyrewala, Sagar Ballary, Dev Benegal and Atul Tiwari. Speaking on the state of writers Vinay Shukla said, “Every producer says script is the backbone of a movie, yet they all want what has already been done before. They do not encourage fresh ideas. Writers are used more as dialogue writers and they do not have an option but to do the given work as they have to survive.” Dev Benegal added, “There are some talents who want to challenge mainstream but they don’t know how to break the closed system. One really needs good contacts.”
Abbas Tyrewala who is quite sad about script writing becoming negligible said, “Till the 60’s we did have writers, but when the Bachchan era came in, the star became bigger than the script. Everything was catered to the star. Later in the 80’s, multiple actors were used to exemplify the script and the script lost its importance further. After the Khan era began somebody discovered the NRI audience and music started becoming more popular, most of the money was recovered by satellite and distribution rights. Box office success was only a bonus and script was completely lost. And in all this writers only adapted to the change. The ability of storytelling is gone away from the genes”. 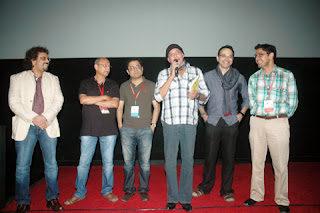 On the other hand Saurubh Shukla had a slightly different take on this, he said, “There is no dearth of writers, I come across one writer every day. The writer has to follow the vision of the directors. I am very excited about this time in Mumbai, nobody knows what will happen when, it is very unpredictable. Instead of being angry, one must write, because the system is the same everywhere.” Sagar Ballary agreed with Saurabh, he said, “We thought no one would notice Bheja Fry. It’s important for the director to decide whether he wants to make money or make a good film.”
Later in the evening the cast and director of the film ‘Nobel Chor’, screened today at Mumbai Film Festival was present with lead actor Mithun Chakraborty. Mithun plays the role of a thief who steals the Nobel Prize given to Rabindranath Tagore. Speaking about working in ‘Noble Chor’ Mithun said, “Noble Chor is the kind of movie that one is always proud to be associated with, since it doesn’t depend on your stardom, instead it keeps you rooted. Generally people go to watch movies to see the stars, but these movies are seen because of their appeal and story, it differentiates between a star and an actor.” 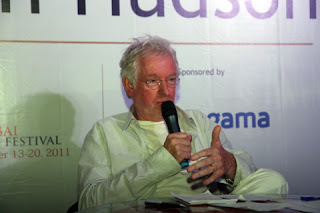 The evening ended with a humongous crowd lining up to watch the Martin Scorsese film ‘George Harrison Living in the Material World’.  Tomorrow as the festival draws to its end, huge amounts of crowds and audience are expected to throng the venue to watch films, especially the closing film ‘Dolphin Tale’ directed by Charles Martin Smith starring Morgan Freeman, Ashley Judd amongst other and to catch a glimpse of Olivia Harrison who is in town to present her movie.
Ravikant Singh
Correspondent
Posted by Films & TV World at 10:19 AM