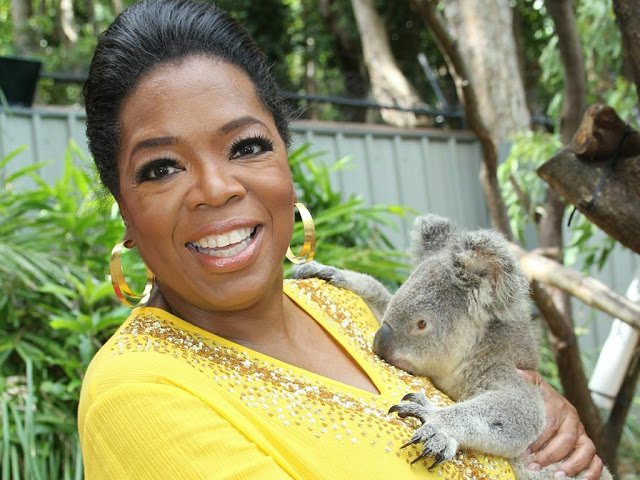 After surprising her 302 loyal viewers with a trip to Australia, Oprah began her once-in-a-lifetime Australian adventure on Hamilton Island, the largest inhabited island in the Whitsundays, a group of islands located off the coast of Queensland. Before surprising a group of 92 Ultimate Viewers, Oprah set off on their first road trip Down Under. What did she want to do first? Hold a koala bear!
At the Hamilton Island Wildlife Sanctuary, Oprah snuggle with Elvis and Phoebe, two fuzzy, friendly koalas, and witness a rare sight—a 6-month-old "joey" that recently emerged from her mother's pouch. "When they're first born, they're the size of a jelly bean," says Rebecca, a keeper at the wildlife park. "She's done quite a bit of growing."
Next on Oprah’s list was a helicopter ride over the Great Barrier Reef. In the Coral Sea, off the coast of Queensland, the Great Barrier Reef is one of the seven natural wonders of the world. The reef is formed when coral polyps secrete limestone.
The view of one of the world most beautiful place took Oprah’s breathes away, leaving the talk show diva in awe. "It's one of those things you've heard about and read about and saw in school and saw on the Discovery Channel, so to be this close to it is really...the word amazing is appropriate," Oprah says. "It's nature in all of it is splendor." And when Brad, Oprah's helicopter pilot, showed Oprah a Heart Reef, a coral formation that has naturally taken the shape of a heart, Oprah exclaimed, "That is so cool. That made my day."
With such an amazing start, there was no stopping. Oprah surprises The Oprah Show Ultimate Viewers at a lavish beach barbecue—or, as the locals famously call it, a "barbie"—at Whitehaven Beach.  The bright white silica sand on Whitehaven Beach makes the party even more lavish.
Oprah brings in the best for her viewers as the food for her party was cooked by none other than chef Curtis. Curtis's seafood feast comes right from the ocean—hand-delivered by a few Australian blokes! "We love a good presentation," Oprah says.
And what can be a better way to end a wonderful first day of her Ultimate Australian Adventure than a waltz dance. Oprah waltzes into the party as Australia's famous Ten Tenors sing "Waltzing Matilda"—their homeland's unofficial anthem.
Watch Oprah’s Ultimate Australian Adventure on Sunday, October 9 at 8 p.m, exclusively on BIG CBS LOVE
Posted by Films & TV World at 5:58 PM