Ra.One’s 3 day collections soars to Rs 570 million... Neither Bodyguard nor 3 Idiots were able to touch this 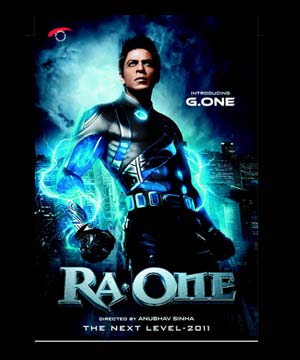 I was recently at the MAMI Film Festival which had an open forum every afternoon. On one such afternoon the topic at the forum was “The relevance of film reviews: Do they really matter today …?” which had Mayank Shekhar, Bhawana Somaaya, Nikhil Advani, Anupama Chopra and Meenakshi Shedde discussing about the relevance and reality behind the film reviews. The bone of contentions that day was do the traditional film reviews really matter in establishing the credibility of the film (or trashing it)? Are many of these reviews bought or influenced and are examples of different forms of corruption. Or are their honest, righteous reviewers still that influence or guide the way people go to watch it in the theaters or in any other form. I vividly remember Mayank Shekhar saying that while he was in Midday he had written an SRK film off and that too on the front page, while in reality later it was found to be a block buster.
Ra.One is one such film. This is again one more film that got critics wrong, absolutely throwing cinema buffs off-guard with their complete negative review. The entire media was there ready to rip this film. One tabloid even went to the extent of pasting pics side by side of certain shots of the original from Hollywood with Ra.One.  However, the box office records are something to throw these critics offguard now as Ra.One box office collection for merely three days crosses Rs 570 million mark. It is a record of sort for any Indian movie and time for the critics to eat their words. SRK has proved he is the Badshah - the King Khan and his biggest gamble - Ra.One got an unanimous verdict – Hats off SRK for giving such a film.
But just as a Badshah, he not only takes his leadership role seriously and effortlessly but also takes risks which no other dare do. If he can be the romantic king, he can also play the Asoka or the village spirit in Paheli. Dare anyone else do that. He is also not a one film a year wonder nor rips his shirt to prove his macho image – the only selling point? Or just banking on some South Indian blockbuster remakes and re-styling, where there’s no risk involved? But SRK goes beyond the limits and mostly wins, though like a lesser mortal he loses too, sometimes. This time to the critics.
Even as the debate goes on, RA.One' is going strong at the box office despite the festive season when people normally prefer to stay at home. Ra.One’s first day collection was around Rs 185 million - ofcourse below Bodyguard for a variety of reason and for one, Diwali is a festival which people spend time at home doing pujas, having relatives visit them and all, unlike an Id when Bodyguard was released. Day two, the collection skyrocketed to Rs. 251 million which is the highest collection ever by any Hindi film on a single day and Ra.One’s 3 day collections have soared to Rs 570 million which neither Bodyguard nor 3 Idiots were able to touch.
In the overseas market, the breakup for 'RA.One' in the UK market is also out. The film has garnered £ 187,468, £ 160,020 and £ 170,000 on Wednesday, Thursday and Friday respectively. This makes the overall collection in the UK market touch £ 520,000 so far.
Posted by Films & TV World at 1:12 PM