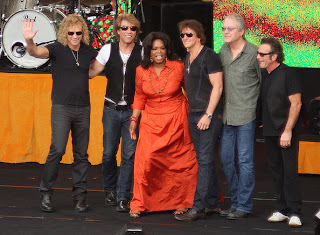 Jon Bon Jovi and his band rocked their way to superstardom 22 years ago. A string of blockbuster hits and electrifying live performances have made them rock star icons. Get a sneak-peek into the lavish life of this rock star he makes his Oprah Show debut on Sunday’s episode of the show on BIG CBS LOVE.
The audience went wild as Bon Jovi and his band performed It’s My Life and You Give Love A Bad Name. They sang along with him, swooned to his voice and screamed for more! The evergreen heart-throb also went on to admit that he loves seducing his fans while he’s on stage. "From a distance, good thing they can't smell me when I'm up there, you know? I work up a stink," he jokes. "Sure there's seduction. Absolutely."
The episode also saw Bon Jovi taking the viewers through a tour of Philadelphia and introducing them to the Philadelphia Soul AFL team. There was also a brief tour of Sanctuary Sound II - the studio on Jon's property in which the band recorded Crush, Bounce and parts of Have A Nice Day.
For Bon Jovi, there’s no place like home! Whenever he isn’t performing to sold-out crowds, he's at home at his New Jersey estate with Dorothea, his high school sweetheart of 16 years, and their four children. Football is amongst his other passions, and little do people know that this football fanatic even bought his own team two years ago, the Philadelphia Soul.
He credits much of his success to his wife and staying close to his roots. "She truly is my best friend because she just gives me all the support and common sense," Jon says of Dorothea. "She's the one that wakes up and goes, 'Here you go, rock star, take a look in the mirror this morning!'"
Jon Bon Jovi also visited the Northern Home for Children in Philadelphia (where underprivileged children are cared for) and played ‘Robin Hood’. He surprised the kids with new clothing for school, book bags (brimming with school supplies) and laptop computers.
Jon also managed to stun Oprah herself into quite a bit of silence when he presented her a check on behalf of the band. Bon Jovi donated $1 Million to Oprah's Angel Network. Jon saw the work she was doing to help victims of Hurricane Katrina. He knew she would make sure the money got to the people who needed it.
The episode ended with Bon Jovi surprising the studio audience by giving each of them a ticket to the Chicago show on the Have a Nice Day tour and then the band performed Have A Nice Day.
Catch this spectacular performance by Jon Bon Jovi on the Oprah Winfrey Show, this Sunday, 23rd October 2011 at 8.00 p.m. exclusively on BIG CBS LOVE.
Posted by Films & TV World at 12:13 AM