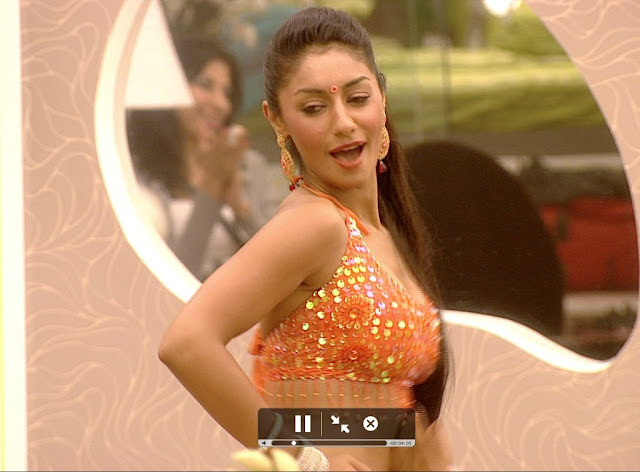 Day 4: The weekly task continues and the contestants reach Kolkata in the morning. Here, Shakti Kapoor is dressed as the judge of a cheerleading competition. The female contestants were divided into two teams – blue and red. Sonika and Lakshmi were captains of the blue and red teams respectively. Contestants choreographed their own moves and a competition was held to determine which team did a better job.
Lakshmi Tripathi, motor mouth in the Bigg Boss House, is given a dressing down by captain Shakti Kapoor for overshadowing her fellow housemates while performing tasks. Lakshmi takes offense to this statement and a catty fight ensues where she picks on everyone and gives them a piece of her mind.
Fights and arguments galore continue with contestants complaining among each other about division of daily household chores. Nihita Biswas starts plotting and playing her own games to get some fellow contestants on her side. She pulls Shraddha Sharma, Vida Samadzai and Gulabo Sapera to her side by creating differences among them based on the daily household chores of washing utensils.
All the housemates are agitated about the toll that the weekly task is taking on them and Shakti calls a meeting to discuss what to do about it. While they all agree that the task should end and even consider boycotting it, Shakti convinces them to let it continue and comes up with a solution that the others give their go ahead to. Mahek and Juhi discuss the heated environment the house and anticipate many arguments in the house in the coming days.
Mahek, Shonali and Lakshmi finally move their topic of discussion to the one thing that is missing from the Bigg Boss House – men! While Mahek states that she is glad that they are no guys in the house, other than Shakti, Shonali says that there would have been issues with breakdown of kitchen duties if there had been more guys in the house. Lakshmi, however, is quick to add that adding to those problems, the guys would also try to woo the girls and add to their problems.
Continuously cycling through the course of the day, Shraddha Sharma grew extremely antsy towards evening. She requested some team member to come relieve her, but no one wanted to take up the responsibility of cycling. Finally, captain Shakti Kapoor relented and another contestant took her place. Tired and exhausted, Shraddha was unable to take a single step and collapsed as soon as she got off the cycle. The other contestants rushed to her aid and got her on her feet again.
Captain nominations for the next week are announced. The contestants are asked whether they would like to elect a new captain for the coming week or if they want Shakti Kapoor to continue in this role for the next week as well. All the female contestants are asked to vote and they get together to take the decision.
Meanwhile Shraddha tries to approach Mahek for a discussion during the weekly task, but receives a nasty comeback as Mahek misinterprets it to be an oncoming fight. Shraddha argues back with Mahek telling her that she doesn’t need to fight with her to gain popularity and that she was just looking to have a normal conversation with her, but in private.
After cycling for days, for the weekly task, the contestants finally reach Mumbai. The commemorate the city that is most famous for being the home of Bollywood, the female contestants were made to dress and dance like Bollywood’s favourite item girls. Mahek Chahel, Pooja Mishra, Shraddha Sharma and Raageshwari decided to showcase their dancing skills.
Posted by Films & TV World at 1:22 AM